Man arrested in Florida after taking backhoe for joyride 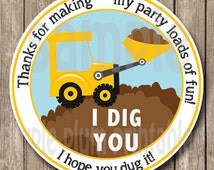 Carl Blahnik would like to thank everyone that attended his backhoe party on the seven mile bridge. It was a rip roaring shindig... $30,000 extravaganza!

A special plug for his fellow Wisconsin residents and also those who made the trip from his current neighborhood, "a wooded area near Coco Plum Beach."

Sheriff Rick Ramsay attended. He was quoted saying...." Blahnik's skill at making tight turns and working the backhoe's scoop to rip up road reflectors over three miles of the bridge was quite impressive."

Thank you also to tax payers for providing funding for Carl's..." year in prison and a year on parole after his 2012 arrest for felony battery in Lake County, Ill."

And also for future funding of his charges:

- vehicle theft
-reckless driving
- fleeing from law officers
- aggravated assault
- littering and damaging U.S. 1.
- driving on a suspended license
- driving an unregistered vehicle and not having proper lights for night driving
- possession of undersized, out of season, pinched, lobsters...... (jk)

"Man accidentally locks himself in car trunk and is rescued by deputy, who then tickets him for pot possession"

The news story goes like this:
- 9:30 pm, Marathon police respond to a call reporting a suspicious car left in the beach parking lot after hours
- The police officer found the 1997 Lincoln with the glove box and all four doors open and heard knocking coming from the trunk. The officer ordered the man out. The man responded that he was locked inside the trunk. The policeman opened the trunk and let him out.
- The police officer found marijuana in the open glove box
- When asked how the man got locked inside the trunk he told police, "he had gone for a walk on the beach and when he returned to the car, he couldn't find his keys. While he was looking, he fell into the trunk and it closed, locking him in".

Wow -  this really got me thinking. What if:
a. I had smoked a lot of pot and...
b. I decide to crawl around my trunk looking for keys and...
c.  the trunk should  mysteriously close over my entire body (latching easily with no slamming) locking me in with no recourse...
What would I do?

Here are the facts... (based on Wiki how...these people really know).

Be sure that you are not too high to know what year your car is made so that you can:
1. "Pull the trunk release. All American cars made after 2002 are required to have a trunk release inside the trunk, thanks to a national law...so find the release and pull it down or up, as the model may require. It will usually be a glow-in-the-dark handle located near the trunk latch, but it may also be a cord, button, or toggle switch, or a handle that does not glow in the dark"

Don't smoke so much pot that you can't:
2. "Escape through the backseat -- Some cars have back seats that fold down to allow access to the trunk. Generally the release for these seats is located inside the car, but there may be one in the trunk as well. If not, try to push, kick, or pry the seats down, and then climb out."

Go easy on that last joint so that you can:
3."Use the car jack to pop up the trunk lid. Many cars have a jack and a few tools in the trunk along with the spare tire. Sometimes they are underneath the carpet in the trunk, or on the side of the trunk. If you can get to the jack, set it up and crank the jack up under the trunk lid and attempt to keep pumping the jack up until the trunk lid pops open."

Last... but not least... is a reminder to:
Don't smoke so much pot that you fall into your damn trunk.

A very good note to self my friends.