Here is a list of MACHETE crimes as reported over the past few years in the Key West Citizen.
I mean, who owns a MACHETE?
It must be a jungle out there.

Man arrested in machete incident
A 22-year-old Marathon man was arrested earlier this week after he threatened another man with a machete.

Man arrested in machete attack
A 33-year-old man who attacked another man with a machete was later arrested in Marathon.

Woman claims man attacked her with machete
KEY WEST — A woman told police Wednesday morning that her 73-yearold roommate attacked her with a machete, but police did not find evidence that was the case, according to an incident report.

CRIME REPORT
CUDJOE KEY- A small get-together over the weekend turned into an argument in which one alleged victim fended off the attacker with a machete, the Sheriff's Office reported.

Gun, machete at center of roommate row in Old Town
No one was shot or cut in an Old Town roommate argument early Monday morning. But a gun and machete were involved.

Man cut with machete
A man accused of attacking a roommate with a machete during a violent argument Tuesday night is facing an attempted murder charge.


KEY WEST - A man armed with a machete reportedly jumped out of van and chased a man on North Roosevelt Boulevard Friday night.

AND THIS IS WHY I LOVE KEY WEST!

The first year we lived here, I have to admit--I was completely duped. I read the paper on April 1st, and told Tom they were building a tunnel from Key West to Cuba and calling it the TUBA.  I also reported that the military had taken back the Truman Waterfront in order to construct a 5 star resort for the homeless, complete with 2 Olympic sized pools so the homeless could stay in shape.  I was totally sucked in...just too real!

Here are a few highlights from the 2018 edition (honestly, there are so many, it was hard to decide). 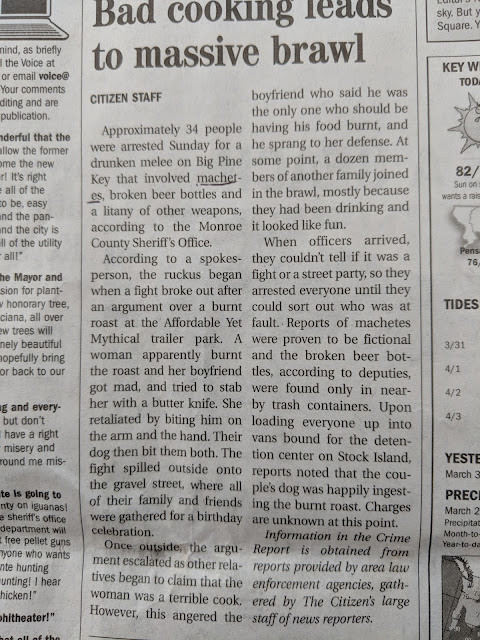 Almost everyone here has a MACHETE, so this article makes it seem too real. And since it's such a dog friendly island, you know  the dog is going to get the burnt roast in the end. Perfect. 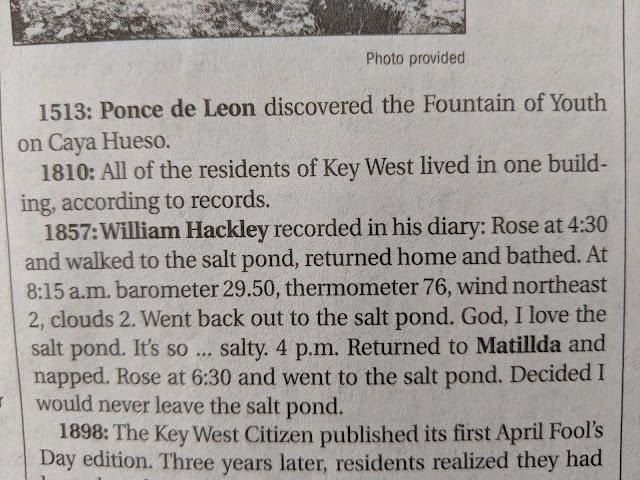 William Hackley does love himself a good salt pond.  Could totally be true.

Or how about this ad? Thank you Key West Citizen!
I love the April Fool's Day edition and that is
NO JOKE!


Posted by carriejohowe at 2:03 PM No comments: