In this crime report, the police watched a man (Raymond) park his golf cart on the sidewalk on Duval St. When they confronted him he said :
- he'd had 6 Captain Morgans 😜😜😜😜😜😜

- he was on vacation with his wife (fun vacation for her!)
-  the police were picking on an old man (he's 57)
-  they should be out chasing criminals and crack heads instead of old men (aka drunk drivers)

When the officers read him his rights, Ray said, "NO HABLA ENGLISH GRINGO".

And, although this tactic might have worked for Ray in his previous four DUI's, the Key West police transported Ray to the Monroe County Detention Center.

During the patrol car ride, Ray hypothesized that the arresting officer would arrest his own grandmother for a DUI. When the officer responded that both his grandmothers were deceased, Ray requested the officer dig up their graves so that Ray himself can arrest the officer's deceased grandmothers for a DUI.

His request was denied. 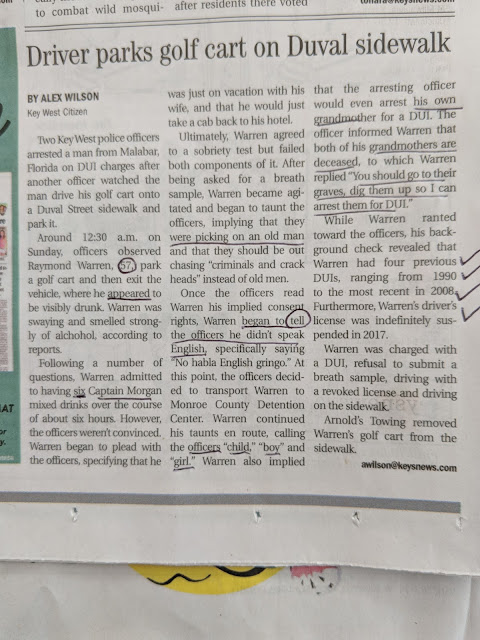 Posted by carriejohowe at 12:15 PM No comments: