I spy with my little eye... another DUI!

Thank you Key West Citizen!  The theme of 2018 is fairly obvious from these headlines. 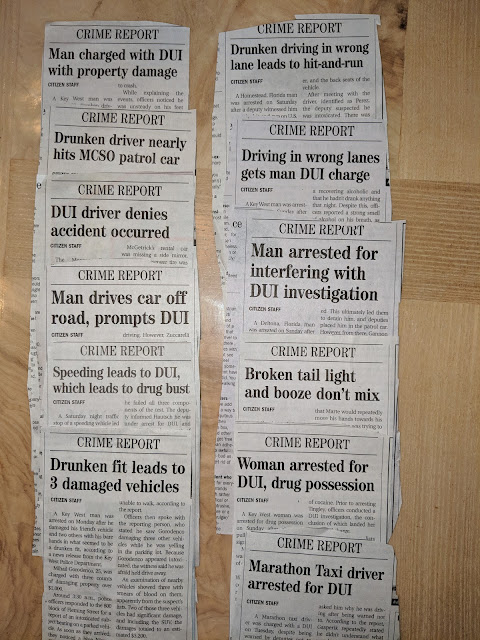 Some highlights from the individual articles (in no particular order):
- "he didn't acknowledge the deputies initially as he was busy applying deodorant to his hands and clothing" (the Old Spice trick fools 'em every time)
- "he said he was going home from his company's Christmas party on Harris St, however the officer noted that he actually lived on Harris St" (the most boring party ever--he had to get out of there)
- "she claimed she was dropping off friends, however she was the only occupant in the vehicle" (not counting her friends Barbara, who died in 1902 and Phyllis, who died in 1897...)
- "the car was missing a side view mirror, the passenger tire was deflated and falling off the rim, there were several deep scratches along the passenger side...and (the driver) denied being involved in a crash. (I believe him.)
- "he had bloody knuckles and was crawling on the sidewalk because he was unable to walk" (we're talking about a human here, right?)
-  "he had gotten into a fight with his wife and left the bar, as he was driving, his wife called his cellphone-this distracted him and caused him to crash" (not the four mixed drinks he drank at the Tutu Tuesday party)
- "he had just left a bar in Big Pine Key and told the officer he was heading to Summerland Key. The deputy noted he was traveling in the wrong direction" (On the positive side, it was noted that he was "extremely cooperative during the stop".)


Posted by carriejohowe at 4:32 PM No comments: